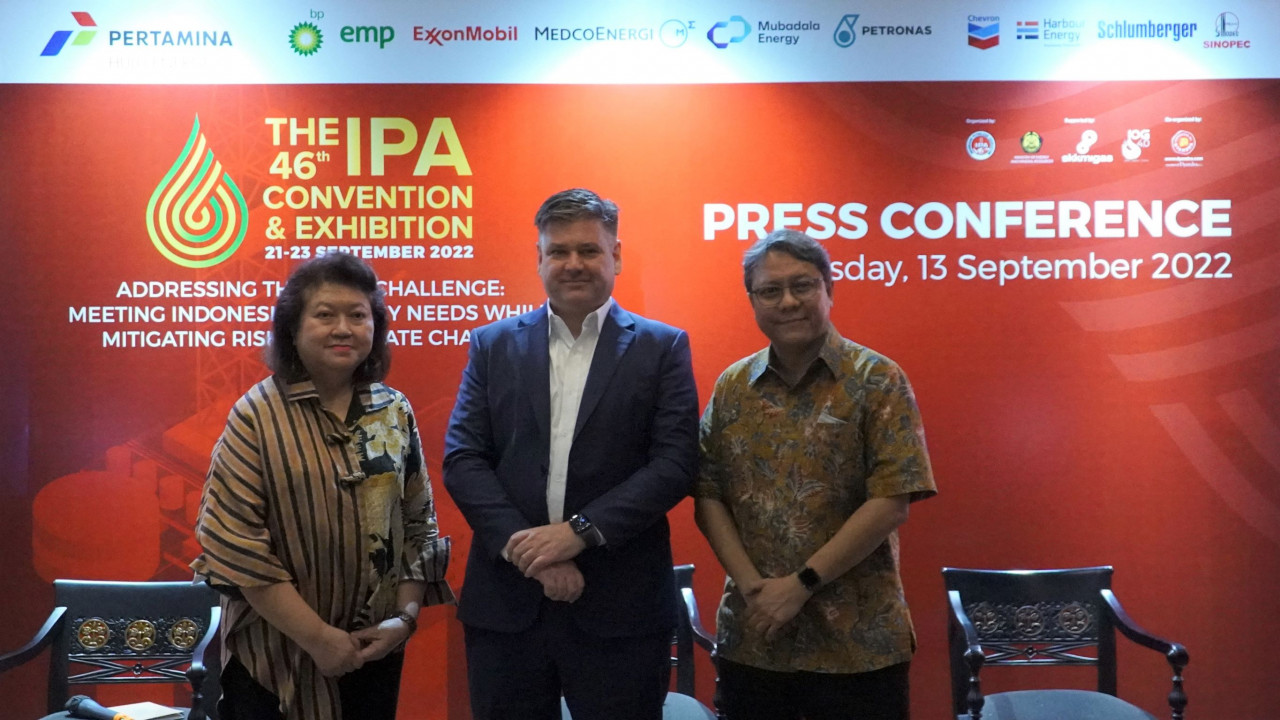 JAKARTA – The Indonesian Petroleum Association (IPA) will hold its hybrid 46th IPA Convention and Exhibition in 2022 (“IPA Convex 2022”) with the theme “Addressing the Dual Challenge: Meeting Indonesia's Energy Needs While Mitigating Risks of Climate Change” on 21-23 September 2022 at the Jakarta Convention Centre, Jakarta.

The Vice President of IPA, Greg Holman, who was present with the IPA Executive Director, Marjolijn Wajong, and Convex Committee Chairperson, Krishna Ismaputra, at the Press Conference “Road to IPA Convex 2022” in Jakarta, Tuesday 13 September 2022, explained that the theme took into consideration the condition of Indonesia's upstream oil and gas sector which is currently facing twofold challenges, namely: meeting energy needs in order to reduce oil and gas imports and contributing to efforts for reducing carbon emissions.

The energy transition is widely accepted, including the oil and gas companies around the world. The Paris Agreement, which targets reducing carbon emissions to contain the rate of increase in world temperature by 1.5-2 degrees Celsius, is recognized as having changed the outlook of the current upstream oil and gas industry. Indonesia, as one of the countries that ratified the Paris Agreement, is striving to reduce carbon emissions resulting from the activities of all industries, including the upstream oil and gas industry.

Also present at the event, was the Chairperson of the IPA Convex 2022 Committee, Krishna Ismaputra, who said that this annual exhibition and convention event is highly anticipated by stakeholders as a venue to discuss the latest issues including technology and other related issues in the oil and gas industry.

This year, continued Krishna, the IPA Convex will be held offline and online. Even though it is an offline event, the implementation of IPA Convex will continue to comply with the health protocol as per the Covid 19 Task Force guidelines. For the online event, IPA Convex can be accessed through the official virtual platform http://convex.ipa.or.id

By combining the two concepts offline and online, the exhibition at IPA Convex 2022 can be visited without time and place restrictions. Visitors from all over the world can see the exhibitors' virtual booths simply by accessing the virtual platform above. In addition to the exhibition, all discussion sessions held at the IPA Convex 2022 can also be attended both offline and online by convention participants from all over the world.

In addition, IPA Convex 2022 will also hold several sessions of Plenary, including the Special Talk and C-Talk which will be attended by leaders of both national and global oil and gas companies as well as the presentation of an award to one of the national oil and gas figures who had contributed to the progress of the national upstream oil and gas industry.

On the occasion, Krishna also explained that the IPA Convex 2022 is supported by several sponsors, including oil and gas companies and other companies supporting the upstream oil and gas industry in Indonesia.

The sponsoring companies are: Pertamina as a Platinum sponsor, BP Indonesia, Energi Mega Persada, ExxonMobil Indonesia, MedcoEnergi, Mubadala Energy and Petronas as a Gold sponsor, Chevron, Sinopec and Harbour Energy as a Silver Sponsor, as well as a number of other companies that become Retail Sponsors, such as PetroChina, Donggi Senoro, PGN SAKA and Solusi Energi Nusantara.