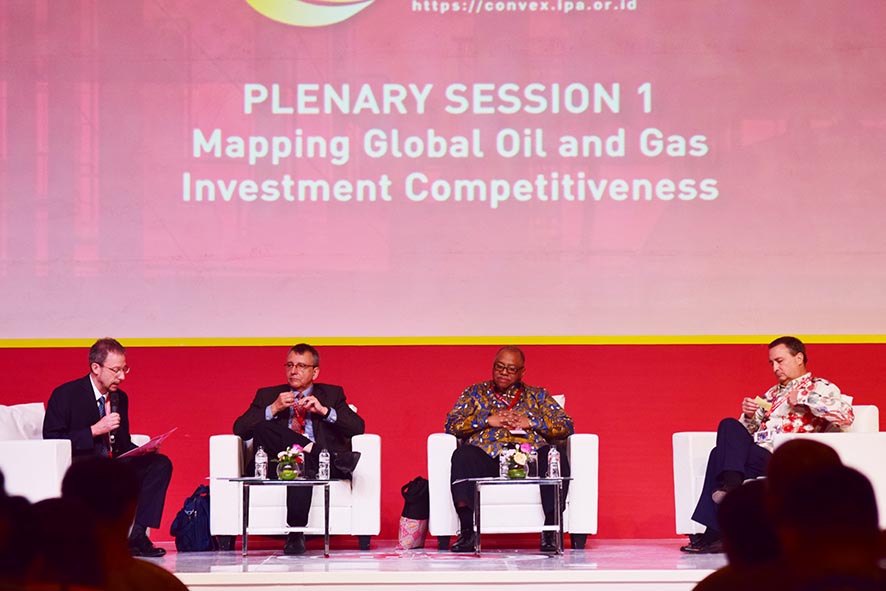 The government and industry players must collaborate continuously in order to forge a better future for the upstream oil and gas industry and improve Indonesia’s competitiveness on the global stage, according to a panel of experts at the first plenary session of the 42nd Indonesian Petroleum Convention and Exhibition today.

There are significant changes introduced in the upstream oil and gas industry. Recently, the government rolled out the gross split PSC scheme to replace the existing cost recovery mechanism. The government is also embarking on bureaucratic streamlining, having removed 186 oil and gas regulations, in a bid to attract investment.

“Indonesia is not as competitive as it should be,” said Chuck Taylor, Managing Director of Chevron IndoAsia Business Unit. Chuck Taylor highlighted the issue of fiscal certainty as a key factor in improving Indonesia’s competitiveness.

For Raymond E Jones, Vice President at ExxonMobil, reducing the risk carried by companies is also key for the future of the upstream oil and gas industry. “Investors will not only look for the rate of return but also the aspects of risk management,” he added.

Raymond E Jones also called for more flexibility from the government in rewarding investors for the risks that they have taken in investing in Indonesia. “There is no one size fits all, there must be flexibility,” he said.

Chevron’s Chuck Taylor said the government must fully realize all the benefits that investors can bring to Indonesia. It is not only about the revenue being generated but also the full range of multiplier effects to the economy, said Chuck Taylor, drawing lessons from the development of the Permian Basin in Texas in the United States, which has been a key component to the local economy for decades.

“The key to improve investment attractiveness is collaboration between the private sectors and the government. There must be a continuous dialog,” he added.

ExxonMobil’s Raymond E Jones said that a similar collaborative approach should also be implemented among government agencies. “We hope that other ministries can follow the good works that the Energy and Mineral Resources Ministry and SKK Migas have done,” he added.