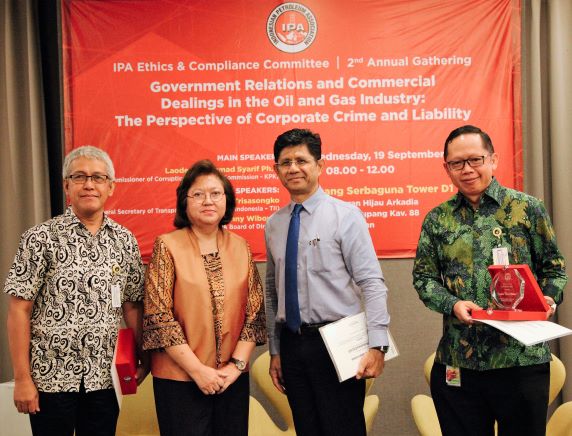 [JAKARTA] The 2nd IPA Ethics & Compliance Committee Annual Gathering was conducted at the offices of BP Indonesia on Wednesday 19 September 2018. The theme of the event was “Government Relations and Commercial Dealings in the Oil and Gas Industry: The Perspective of Corporate Crime and Liability” and this important gathering was attended by 75 participants. The main speaker was Mr. Laode.M. Syarief as Commissioner of KPK and other speakers were Mr. Dadang Trisasongko as General Secretary of Transparency International Indonesia (TII), and Mr. Tenny Wibowo, member of the IPA Board of Directors.

In his opening remarks, Ronny Siahaan as the IPA ECC Chairman conveyed in his speech that the 2nd Annual Gathering Event was being held as part of the IPA – ECC role to continue fostering an anti-bribery culture within the oil and gas industry, to promote best practice sharing amongst members and also to support the government to create a conducive business and investment climate in Indonesia.

There were two main presentations during the event. In the 1st presentation, Mr. Tenny Wibowo explained that the oil and gas industry requires a long and complex journey from exploration to production and can potentially involve bribery risks relating to permits, transparency in processes, security and vendor management. He explained the IPA role and the series of collective efforts that were being undertaken in combating bribery and corruption through comprehensive prevention, detection and response programs. He closed his presentation by highlighting the importance of spreading the key message of integrity that is needed from employees, companies, associations and the country.

In the 2nd presentation, Mr. Laode. M. Syarief explained that corporations are liable for corruption acts performed by employees, vendors, agents and others who are under or within their work relationship. He reminded that there have been 5 Companies that are being prosecuted under Supreme Court 13 in Year 2016. To protect the Corporations, he emphasized that Corporations must not tolerate bribery, maintain a high ethical value, and raise any concerns by reporting through KPK’s whistleblowing system when experiencing an insecure situation. Participants were very enthusiastic and raised several questions, which were addressed comprehensively by Mr Laode.

During the subsequent panel discussion, Dadang Trisasongko explained that Indonesia’s biggest challenges were political corruption and lack of legal enforcement. The next national prevention strategy will focus on licensing and commerce, state finance, law enforcement and bureaucratic reform.

At the end of the event, participants were involved in an interactive survey to obtain the participant’s perception on corporate crime conditions, key challenges and critical areas for improvements which are relevant to the oil and gas industry in Indonesia and which stimulated the participants ideas on critical aspects to prevent and combat future acts of corruption.